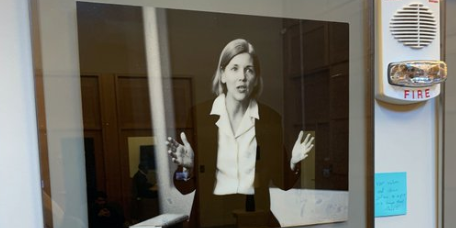 My deal is that I’m a recovering misogynist. When the Harvey Weinstein stuff happened I only felt sorry for him. I felt really sorry for him. I couldn’t believe he was getting in trouble. I realised I had no empathy for the victims, in fact, in my mind I even had trouble considering them victims. This made me curious about myself and eventually I concluded that I had always valued doing what I was supposed to do for the patriarchy more than I valued doing what I wanted to do and that this was evidence of a kind of misogyny. I’m doing a play about it so it is heavy in my consciousness. How much we are blind to how unequally we treat ourselves. How we ignore our own pain because it is not useful to power. We accept. We like men better than women and we feel weird with female leaders.

Many people are feeling super sad today about Elizabeth Warren dropping out but in true good girl style we are all politely pledging our troth to one of the two old white men WE ALL AGREE ARE INEVITABLE. Well sometimes I write plays but sometimes I negotiate commercial contracts and I don’t give away anything of value for nothing. Why not make a little noise?

We are feeling sad and shutting up. And I worry that this in itself is a vote of no confidence in women. We all got quiet, didn’t we, and reflective, and insodoing, did we disempower ourselves? She is still going to be in Washington! It feels like we are all writing elegies when we should be writing battle plans.

Tamara Burke started #metoo so that women could be empowered by empathy. Empathy starts with knowing and paying attention to your own goddamned feelngs unfortunately. And intensely my heart cries cries cries out for a woman to lead. Yours does too.

I worry about all the grief. I think it’s a pit you can fall into prematurely. It has that seductive element of passivity. It’s easier to grieve than to act because then you don’t have to go all out in support of Elizabeth Warren.

I wonder if it’s a little goddamned early to be in mourning. Traditionally the patriarchal narrative owners liked their women dead, or at least submissive, on her back. Are we guilty of being slightly more comfortable with her campaign there too?

I wonder however what could be accomplished with not very much action even. Just a simple act of unity, a simple sort of sisterhood pledge. A #metoo again. Make Sanders and Biden compete for who will give Warren the most power in the administration. GIVE HER TREASURY AND A HEALTHCARE COMMISSION. Women should be demanding to know how much these two elderly dudes are willing to collaborate with Warren, and we should be ready for Warren to run if Trump gets a second term. She should be the gold standard against whom all others articulate their plans. We should hear about how Sander’s healthcare plan compares to Warren’s. They should be working for our vote. And maybe we women – maybe we should consider ourselves a voting block. Maybe it’s time to come out and say gender is important to us, individually and collectively.

I remember a friend telling a story of going to an Obama rally in New Hampshire in ’08. As he followed two elderly women out, he heard one say to the other,”yes I agree he seems wonderful but I can’t in good conscience vote for him when a well qualified woman is running.” That always stayed with me. We can still back this well-qualified woman. We can still help her make real her vision.